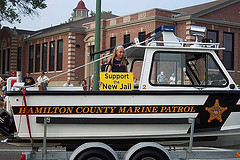 Brian Shrive, a Hamilton County resident has asked for a Temporary Restraining Order against Sheriff Simon Leis.  When Sheriff Leis sent a letter to the personnel in the sheriff's correctional department requesting them to vote for the jail tax and suggesting there might be layoffs if it fails, he was engaged in campaigning using public monies. His letter was apparently composed by his personnel and it certainly was distributed using a government computer system. Mr. Shrive requests an order of injunction against the sheriff and recovery of the money spent so far the sheriff’s illegal advocacy.

Mr. Shrive's request for a temporary restraining order also complains about the Sheriff's organization use of public vehicles--a tractor-trailer, van, boat and helicopter--to carry signs stating "Support the New Jail" at the recent Harvest Home Parade.   Per Section 9.03(C) of the Ohio Revised Code: “… no governing body of a political subdivision shall use public funds to do any of the following: (1) Publish, distribute, or otherwise communicate information that does any of the following: (a) ... (e) Supports or opposes the nomination or election of a candidate for public office, the investigation, prosecution, or recall of a public official, or the passage of a levy or bond issue.” (emphasis added).

Mr. Shrive lost his request for a temporary restraining order. See results of request for Temporary Restraining Order by clicking here. See information regarding Shrive's appeal here.  Will the same Hamilton County Court System give the Sheriff a "pass" on this blatant use of taxpayer monies to campaign for a levy?